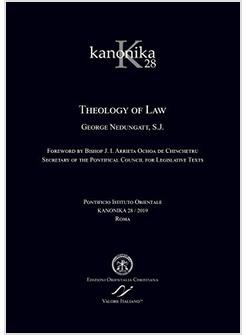 Roman Catholic theology experienced profound growth and development with the Second Vatican Council and since. With the renewal in scriptural, historical and ecumenical studies, open to new philosophical currents, and sensitive to diverse cultural contexts, Catholic systematic theology has undergone a remarkable evolution. The Church is societas sui generis, but vera societas “constituted and organized in this world as a society” (LG 8). That the Church is a true society is obvious to all who look at its history; but its specific nature is involved in mystery. In particular there is the relationship between faith, law and liturgy in the light of the classical adage Legem credendi statuat lex supplicandi. The Church is an adoring society. But the Church is also an acting society, and the adage should hold: Legem agendi statuat lex canonica.

The author is emeritus professor of the Pontifical Oriental Institute, Rome, where he has taught canon law, theology of law and philosophy of law. He has published several works in the series Kanonika, of which he was editor from the beginning till 2012. His recent publications include: Quest for the Historical Thomas Apostle of India: a Re-reading of the Evidence, Theological Publications in India, Bangalore 2008; “The Council in Trullo Revisited: Ecumenism and the Canon of the Councils,” Theological Studies 71 (2010) 651-676; “Christian Origins in India According to the Alexandrian Tradition,” OCP 77 (2011) 399-422; “Typology of Peter in the Symbolic Theology of Aphrahat,” OCP 80 (2014) 291-328; Renewal of Life and Law: An Indian Contribution (Dharmaram Canonical Studies, 10), Dharmaram Publications, Bangalore, 2015. His latest book is Covenant life, law and ministry according to Aphrahat (Kanonika series n.26), Edizioni Orientalia Christiana & Valore Italiano™, Rome, 2018.
Il primo e unico servizio settimanale di informazione sui libri religiosi e laici in uscita in Italia.